Second wave feminism began to get underway in Britain in the late 1960s and by the early 1970s women were meeting to debate issues such as housework, child care and women’s education. Consciousness-raising groups also began to form where women met with a view to emancipating themselves, intellectually and emotionally, from the low social expectations commonly held for women.

Domestic violence, however, was so taken for granted at that time that it was not initially perceived as a feminist issue. Occasionally social workers came across it, tut tutted and suggested women should try harder to maintain harmonious relations with their husbands.

Then in 1971 things changed. In Chiswick a group of women, concerned about the numbers of isolated and lonely young women with children, decided to set up a community centre where these women could meet and socialise. What the centre increasingly attracted, however, were women desperate to escape from years of domestic violence. These women didn’t come for coffee and a chat, they wanted somewhere to stay. The centre morphed into the first women’s refuge and one of the group, Erin Pizzey, decided the plight of women subjected to domestic violence should be publicised.

Her accounts of the horrific experiences abused women reported caught the attention of the press. Domestic violence became a public issue and many women attracted to feminist activity were drawn to the refuge campaign. In East Anglia several refuges owe their origins to feminists. Domestic violence sparked widespread outrage and sympathy among women generally, however, and women with very different backgrounds joined refuge campaigns. 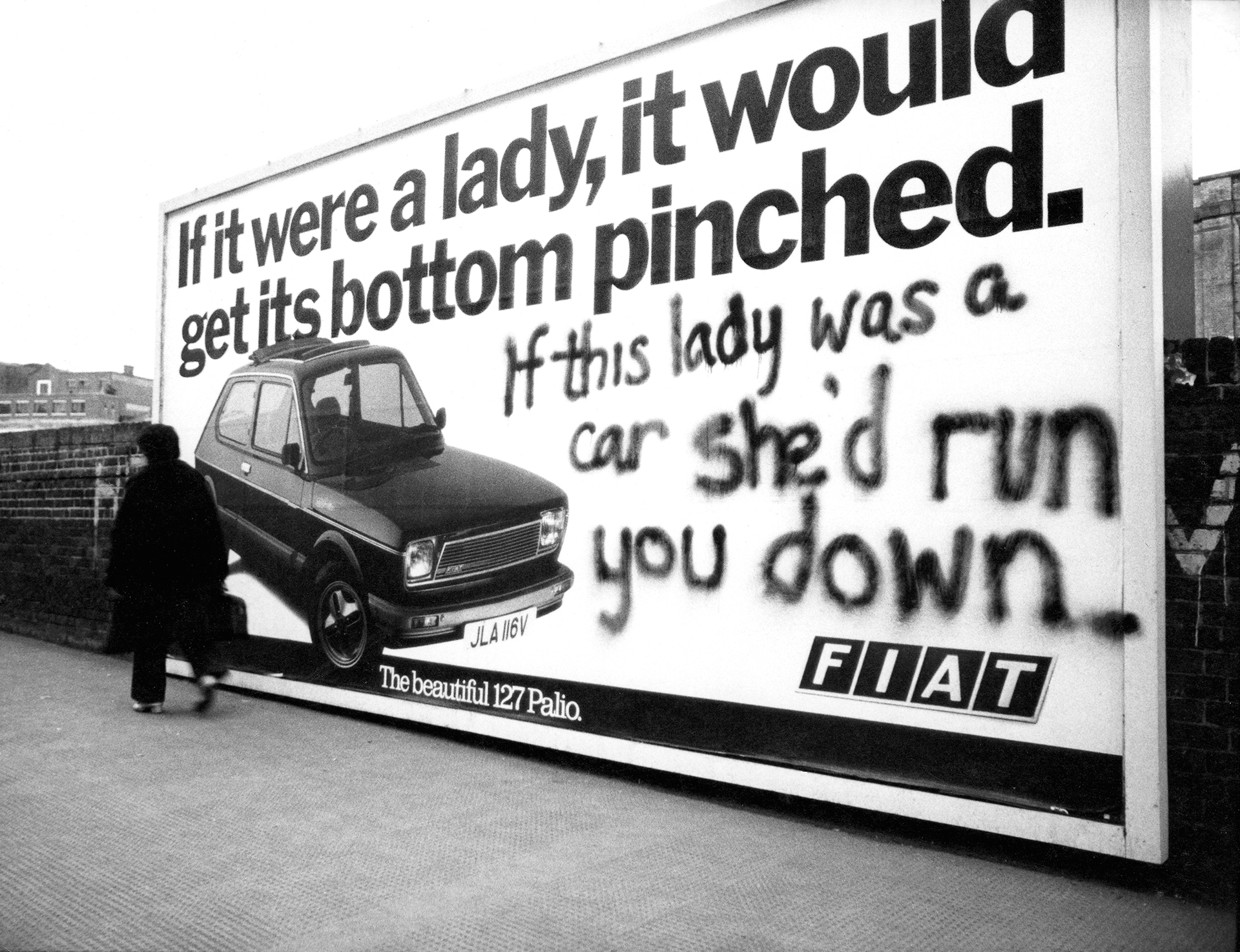 The immediate task for a group seeking to set up a refuge was to provide evidence of need. Several local authorities, for example, firmly maintained that there was no domestic violence in their area:

The Deputy Head of the county’s Social Services Department, Mr Hawker, said that the actual need for accommodation for battered wives in the Colchester area was minimal.

… there can’t be that many women fleeing brutal, uncontrollable husbands during a week. The establishment of a refuge could, in the passion of a matrimonial upset, provide a convenient and comfortable bolt hole for wives who really know physical assault is unlikely.

Campaigners set about collecting evidence of need. One group organised volunteers to approach local solicitors for information about their matrimonial cases. What they learned was, that while discussing general marriage difficulties, it was not uncommon for women to suddenly reveal that their main problem was being ‘battered’. Another evidence-collecting exercise involved trawling local papers for information about the murder of women by a husband or partner. Compelling evidence began to accrue:

A report published today reveals that… in the past year social workers… have dealt with at least 20 cases of severely beaten women. Two women had broken jaws, two had broken noses, one suffered brain damage, two suffered attempted strangulation and one had 38 stitches in her face… All the solicitors who took part in the survey had seen a number of battered women during the past year, some as many as five a week, and it is estimated that at least 398 beaten wives had sought help…

Two women had broken jaws, two had broken noses, one suffered brain damage, two suffered attempted strangulation and one had 38 stitches in her face”

As campaigns for refuges got underway campaigners faced everything from outright rudeness to warm support, with amusement and embarrassment in between. At some point, however, most campaigners faced some serious hostility. Play Audio 1 The discovery of more and more barbaric incidents of domestic violence, however, led to a groundswell of public horror among ordinary people. Pressure on local councils mounted forcing them to find properties for campaigners to rent. Soon refuges were opening across the country and by 1974 the Women’s Aid Federation had been established.

While the experiences of White British and British Asian women as they set about establishing refuges were often quite similar, there were also important differences.

The 1970s and 1980s, a period of economic downturn following the boom of the 1960s, were a time of increased racism and racist violence in Britain. Groups of older Asian women also began to strike against the unequal treatment they received in many workplaces. The earliest and most well-known of these was the year-long Grunwick strike led by Jayaben Desai.

During these decades increasing numbers of politically aware young Asian women were also graduating from university and entering the ranks of social workers, solicitors, probation officers, youth workers and academics. Many of these young women were already involved in the anti-racist movement and aware of, and influenced by, the history of anti-racist and post-colonial struggles. Racism, as part of the tissue of their everyday lives, came up spontaneously and repeatedly in the British Asian interviews.

One interviewee whose parents ran a post office in the 1970s recalled:

Skinheads coming into the shop, stealing things in front of us… abusing us racially and moving out… being called a ‘Paki’ quite regularly… and just generally feeling… it’s not safe on the streets but not being able to do too much about it.

And she describes this as ‘mild racism’. The prevalence of racism shapes the story of the Asian refuge movement in a number of ways. 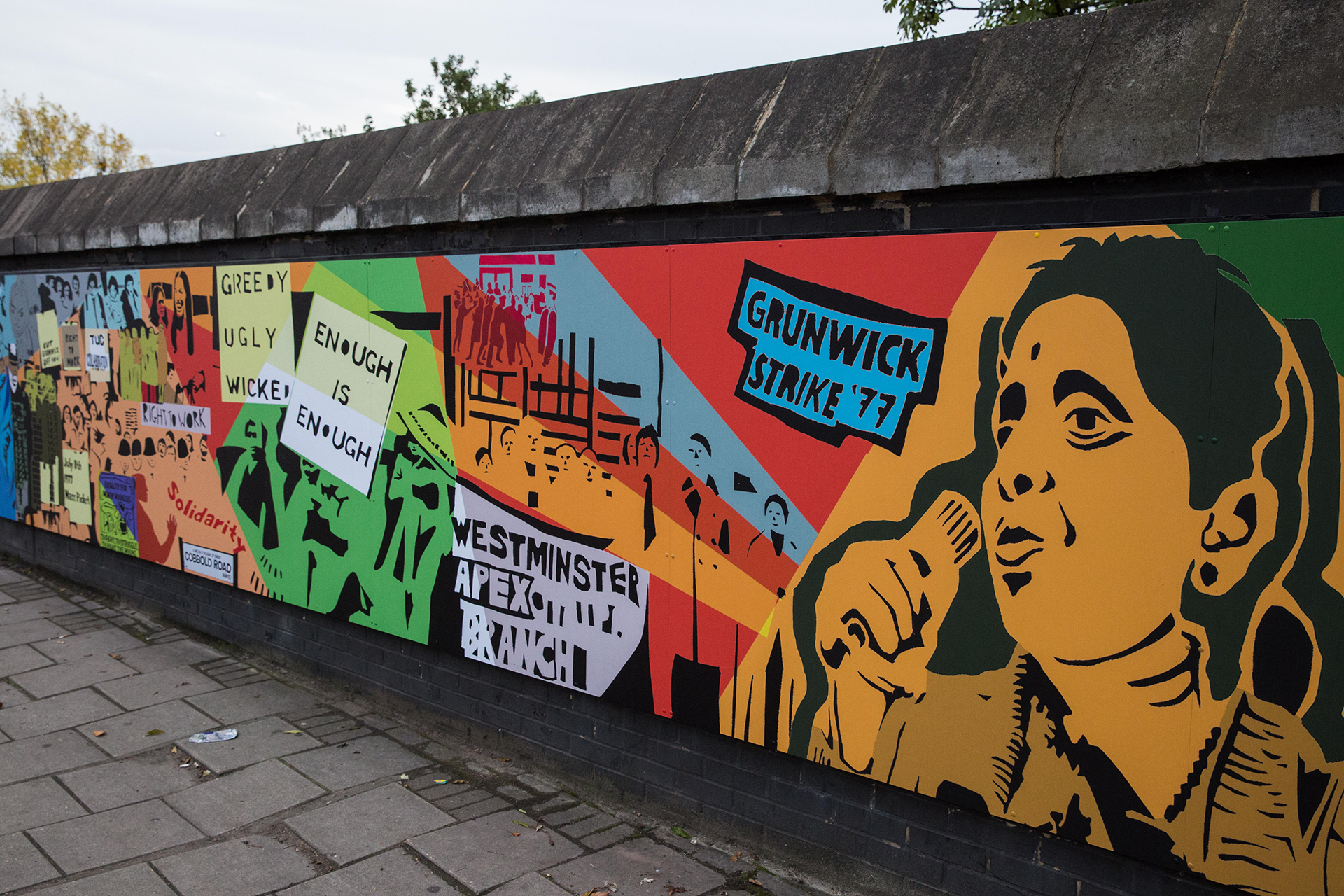 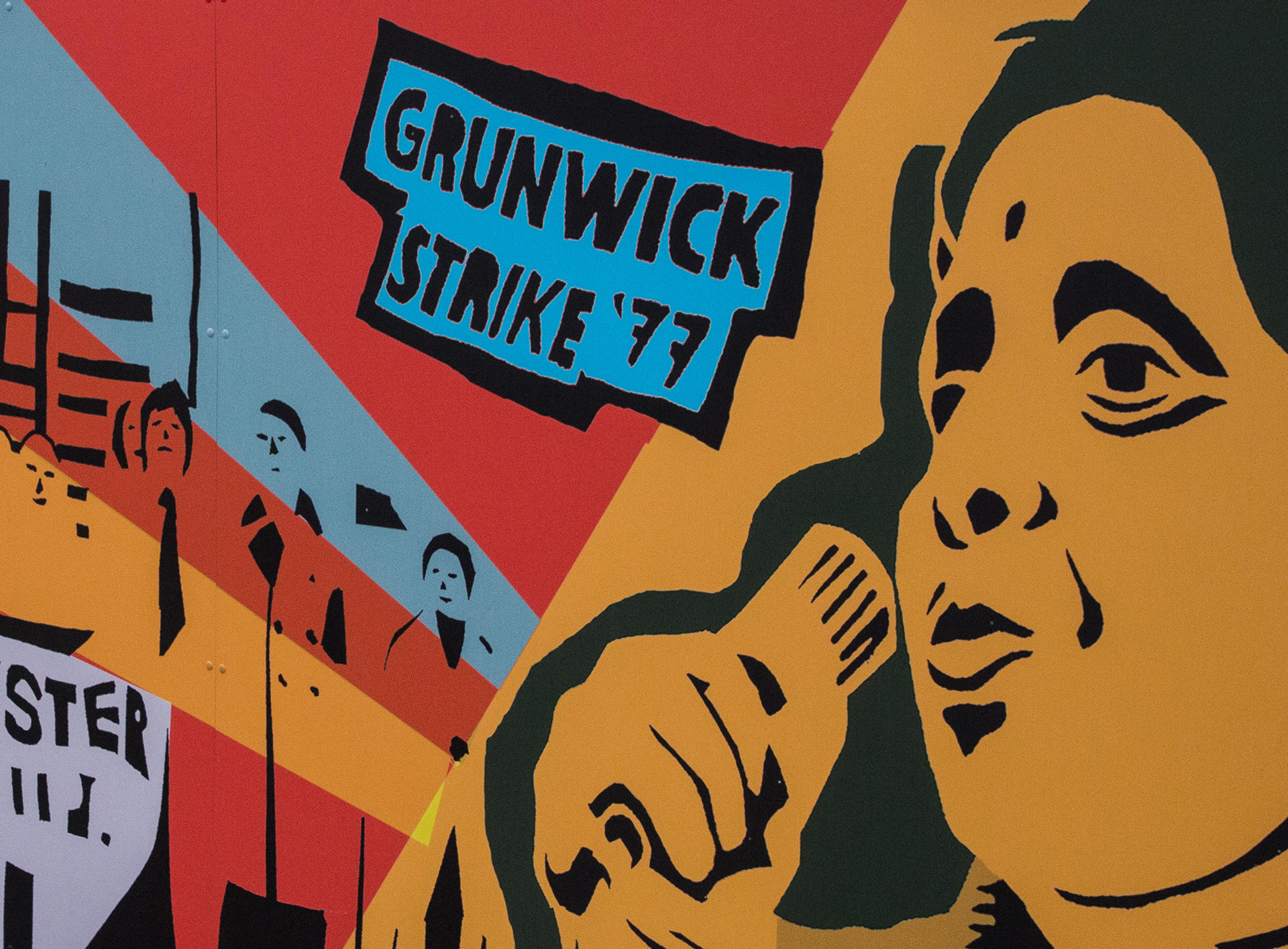 The professions these young women were now entering led a number into jobs in community organisations that were attempting to enhance the provision of services for British Asians. This further sensitised them. The work of one, for example, led to encounters with women who were experiencing domestic violence in their homes but had no-one they could talk to about this:

Newham Monitoring Project provided services to families that had experienced racism… providing them with housing, legal advice… Quite often when I was working with families, the male member of the family would go out of the room, and the woman would say, ‘Look, it’s not just racism that I’m experiencing. I’m also experiencing domestic violence, but it’s not something that I can really talk about’. I had three or four cases like that… which I took back… to Newham Monitoring Project… and said, ‘Look, this is a real life issue that we need to deal with.’

Being exposed to such issues, alongside racist violence and punitive immigration policies, led to conversations among Asian feminists and professionals about what was needed to support women in these situations. One requirement was clear and urgent. The general invisibility of ethnic minority women within mainstream feminism, both in its theory and in practice, was alienating many Asian activists. This needed to be addressed. Meanwhile it led Asian activists to look to alliances with women of African and Caribbean origins in the UK with a view to their campaigning together against the multiple oppressions and exclusions women with their backgrounds experienced in British society.

A distinctive Black Feminist movement which challenged both the racism of British society and oppressive gender practices within their own communities began to emerge. The term ‘black’ troubled some women, however:

At the Asian Women’s Centre we would talk about black women, and the women would say, ‘Well we’re not black,’ and we would say, ‘But nobody is black. We use it in its political sense.’

Later the same interviewee recalled how:

… a Women’s Aid conference… was taken over… by this debate around who is black? [with] a lot of African women standing up and saying… ‘Asian women aren’t really black and they shouldn’t be using the term’. And some… Asian women saying, ‘Yes, we’re not black,’ but the rest of us… adopting that term in its political sense…

As ‘black’ gathered credence as a political term, however, Black Feminism became a forceful political driver for various groups of energetic young Asian women as they set out to establish specialist refuges for ethnic minority women.

One argument put for specialist refuges was that ethnic minority women entering mainstream refuges very often not only felt isolated but reported racism from other residents and even staff. This drove some Asian women back to abusive homes:

when we got black women coming forward in terms of domestic violence we tried to place them in the local generic refuges and… sometimes it was a few weeks, other times… three or four months. But the majority tended to go back to the abuse. And we would question them… ‘Why is it… you’re going back?’… And what clearly came out was… there’s quite a lot of racism from other women… and the workers haven’t got a clue… Women who would be vegetarian, women who would only eat halal meat were having to use the same cooking utensils. ‘We’ve just been transplanted from one form of abuse into another’… So they would go back.

Look, this is a real life issue that we need to deal with.”

Campaigning for specialist refuges was as much an uphill struggle as it was for White British campaigners and met with an equal if not stronger array of hostile responses. Faced with a request for a specialist refuge Asian spokespeople often claimed, echoing the ignorance and conservatism of some of their white counterparts, that there was no domestic violence in their community. There were also plenty of examples of straightforward misogyny. Play Audio 2

There were also attempts to discredit the campaigners by calling them ‘westernised’ and ‘not rooted in their culture’ though the campaigners themselves would have said that objecting passionately to domestic violence in no way meant that they were not deeply attached to many aspects of their culture.

One thing that upset campaigners was the response some got from the anti-racist movement. Expecting warm support for what they were doing they were taken aback when told that they needed to prioritise the race issue over that of violence against women on the grounds that:

… we’re still finding our way in this community and we don’t want to ruffle feathers with the men… let’s just focus on the racism.

They did not appreciate this second ranking.

Stamina paid off, however, and a wide range of Asian women began to support them:

And it worked. Offers of a house in Newham eventually came through. They were on their way. Dedicated refuges were also opening in other parts of the country too. These specialist refuges were also joining the Women’s Aid Movement, bringing to it a ‘black’ voice that had been lacking. 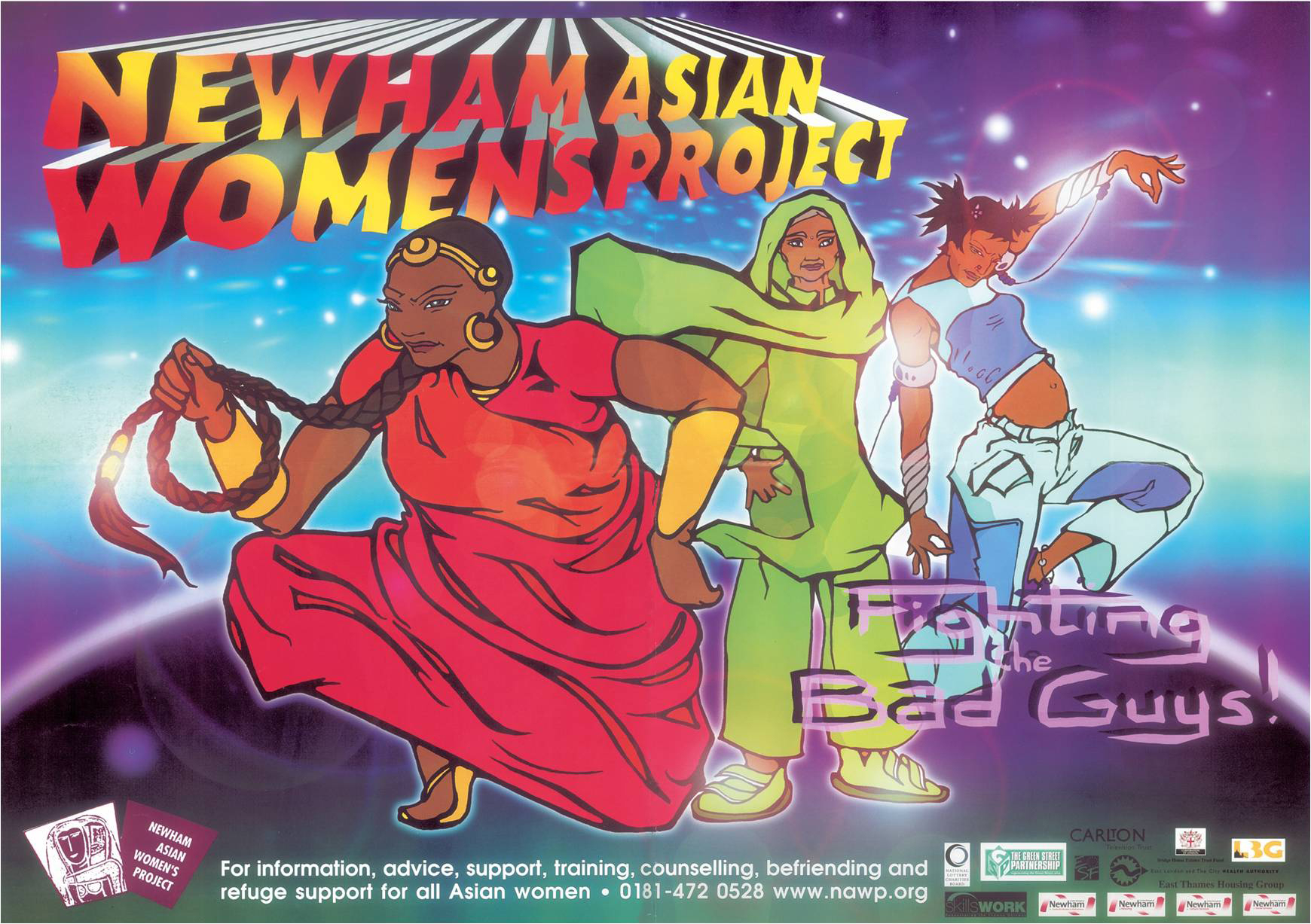